How to set up Indiviual Cooldowns

To begin we will head to Commands > Chat > Cooldown Settings. These will be the global cooldown settings for all chat commands only.

Each Command has its own global cooldown options. Twitch Points, Twitch Extensions, and Trovo Spells all will have their own ways to use global cooldowns.

Global Cooldowns is the fallback if you do not have an individual cooldown set. If you do not want to have a global cooldown we can turn this off and individually set up the commands that we want.

For this tutorial, we will focus on Chat commands and turn off Global Cooldowns. 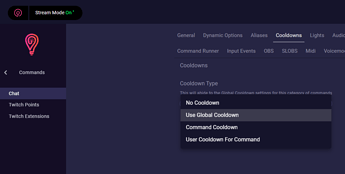 Select Command Cooldown and we’ll set up the duration for 30 seconds.
You can allow certain user levels to bypass this cooldown as well if you choose and you can also set up a chatbot message when this cooldown is in the cooldown period. We’ll press Apply and then Press Refresh. 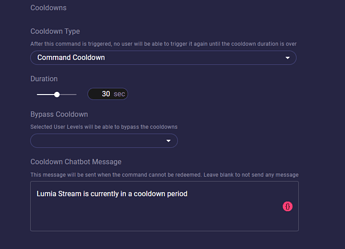 If we head to our dashboard as well, we’ll see that the command is indeed in the cooldown atm. And it will clear when it’s over.

There we go. As shown earlier we could also set up a cooldown for an individual user by setting the type to User Cooldown. If someone redeems that same command you’ll see this user is in a cooldown, but the other user can redeem one time before they get put in the cooldown as well.