Since Version 6.1.7 you can let Lumia Stream take a screenshot and send it directly to your Twitter Feed.
You can decide if you make it available to everyone through a chat command, Twitch point redemption, or even an extension command with bits. Or you could set a button for your Stream Deck or Touchportal. Almost unlimited opportunities.

But also you can set it up as a Twitch Stream Live alert to show your followers that you have gone live and provide a screenshot of the game you are running. (Remember: It triggers immediately and doesn’t check what your screen is showing!)

I mean, you’ve been able since months to do that by setting up key/mouse output triggers and hotkeys. But now you can do it with a straightforward variable.

It is ever so easy. Just create a command by going to Commands → Chat. Click on Add Command and choose your options as you are used to.
Give your command a Name. We just call it screen
We don’t need lights in this example so we put our Type to No light change.
The Duration is not important as well, so we can leave it at 4 seconds.
Later we will talk about the User Levels 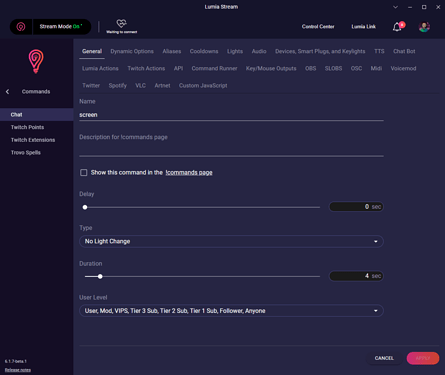 Now we head to our Twitter tab at the top.

Now you can enter a fancy Message for your followers. Now we do the magic.
In Media Path you only need to use the variable {{screenshot}}

THAT’S IT! This is all you need to do.
Now every time someone types in your chat !screen Lumia Stream will take a screenshot of your screen and tweet it together with your message to your feed. 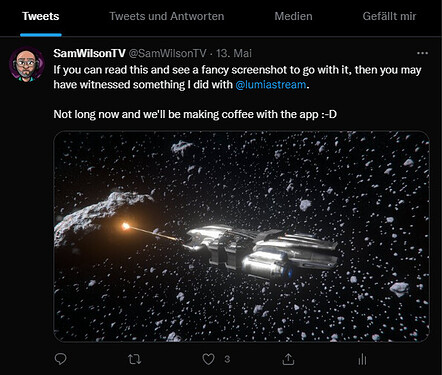 About User Levels: You need to be aware that Lumia Stream also captures a screenshot via your command when you are not streaming but Lumia Stream is running on your computer. So to avoid unwanted tweets we recommend to be extra careful who is allowed to use this command or that you take care to turn stream mode off if you are not streaming. You also could setup a Stream offline alert with a Lumia action that turns off the screenshot command. I guess you don’t want to look at your Twitter and someone tweeted a screenshot of your screen while you were watching SamWilsonTV’s YouTube videos

Yet this feature is only available for Twitter actions. We hope that we can soon offer this for i.e. Discord Webhook as well.