Automations are not running reliably in an always-on scenario 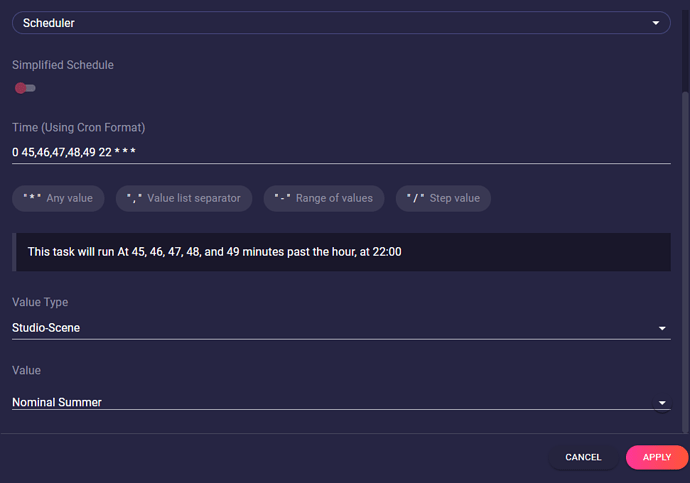 5- Describe the bug:
My PC runs in an always-on scenario, with Lumia running 24/7 for smart-home use primarily. Recently I started adding automations after mastering the CRON format. The first attempts worked fine as the automation was set to run shortly after I created it and gave Lumia a refresh. However beyond this I have about a 20% success rate. I’m unclear on if the automation itself has ever failed to even get added to queue (so far I have seen it get added and run each time), but I can confirm that when it does get added to queue and finally executed, the automation has no effect. It’s configured to set a scene, and confirmed to work, but after long unattended periods of time it simply does nothing.

The automation I created simply sets a scene. I suspect that it fails because the link to my Tuya api somehow has gone dormant. The thing I find odd is, if I use Lumia Link, run a command or forcibly switch to a scene via Lumia itself, it always works on the first try no matter how long I have left the app unattended… it’s only the automation tasks that fail to run after the app has been unattended for long periods of time.

I am now running Lumia with deep logs enabled and have set the job to run 5 times in a row one minute apart to see if that at least forcibly gets it to run the task at least once with success.

This obviously prevents me from accomplishing what I meant to use automations for, because in the context of smart-home usage, I’m going to want to count on the automations.

Would you open a ticket on discord and explain better what you are trying to do, please?

I’m just trying to run an automation once every 24 hours on a PC that is on 24/7 (no reboots, no sleep, no hibernate) and it rarely ever works. It seems after a day when Lumia tries to run the job, the Tuya api link must have gone dormant.

What I tried to explain above is this is the only scenario where Lumia runs something that has no effect. I often leave Lumia up for days on end and when I use Link or the control panel to set a scene, it works. I don’t know why the automation has no effect.

This topic was automatically closed after 20 hours. New replies are no longer allowed.